There's a lot of cheerful parping among the pundits this morning about a “change of direction” for the government after the apparent imminent departure of belligerent oddball Dominic Cummings—Britain's second most risible eugenicist—and about an end to the Tories' culture wars, but don't hang your “Am I Allowed To Say Racism Is Bad Again?” bunting just yet. The announcement yesterday that the government had appointed David Goodhart as an equality and human rights commissioner is simply a continuation of the rightwing project to undermine and corrode any institution that threatens to pursue equality by slowly filling it with people who despise it. Here's an example of why the Tories consider Goodhart qualified for a prominent role protecting people's rights. 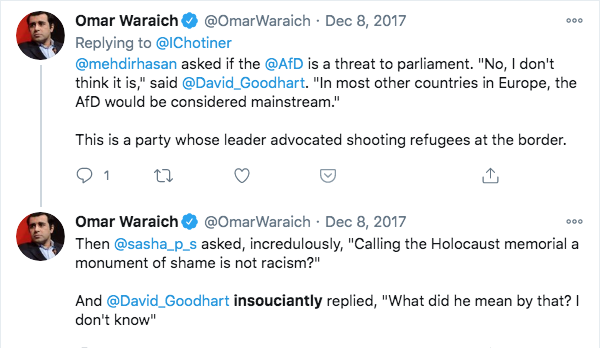 The Tories have already calculated that in the wake of the covid/Brexit economic earthquake over the next couple of years there's no way they can appeal to people on a pragmatic basis, so their only option is the sordid culture-war nonsense that sends their constituency associations into a frenzy, raises the political temperature all round and ultimately ensures that people will get hurt, including:

- Immigrants are coming to TAKE YOUR STUFF
- All these gay genders they have now must be stopped because they threaten YOUR RETIREMENT PORTFOLIO
- Acknowledging your country might ever have done anything wrong is both TREASON and PERSONALLY DIRECTED AT YOU
- Those liberal elites with their hot drinks are the ones HOLDING YOUR REGION BACK, even though we're the ones actually in power and refusing to help you

That calculation won't have changed with the departure of one seething weirdo and his less well-known but equally culpable friends. This shit isn't going anywhere. Thank God the UK's Holocaust museum isn't state-run or by now No. 10 would have appointed David Irving and Tommy Robinson to run it and made it compulsory for school groups to attend its new permanent exhibit called "Hey, We're Just Asking Questions".
Collapse